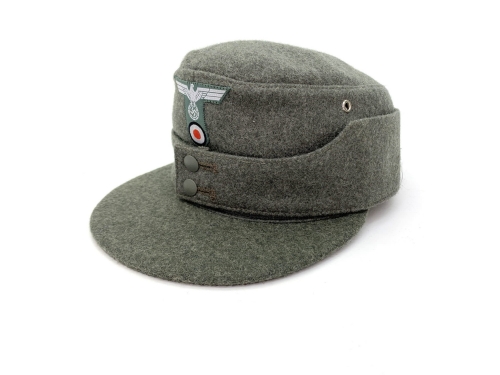 Reproduction of converted Heer M42 billed Einheitsfeldmütze, as was commonly done at the time, this standard issue M42 cap (made of original wool) had a bill made of reproduction fabric, added giving the appearance of the popular M43 cap. Converted M42 caps are often observed in period photos and they are not so rare!

Germans used whatever they had to make visors for conversion their M42's, sometimes even scraps.

First I made the m42 cap from the original WWII German cloth, then I made the visor from a copy of the feldgrau cloth,  then I ripped front part of the M42 cap and sewed the visor with a different thread to mimic the original process of conversion. (SEWING OF VISOR MAY BE SLOPPY!! - same as originals) It was time consuming to make it properly.

REAL CONVERSION OF M42, not M43 with grommets!

totally outstanding in all details!!!

I&#039;m very impressed by this cap, because it&#039;s very well made and the quality is really nice. Unfortunately my size had been sold out, so I ordered this cap one size bigger (because I wanted it so badly ^^) but it fits perfectly :D

Excellent craftsmanship the use of NOS and new material is a jaw dropper .if it had original insignia and age .it could be mistaken for original.well worth the money!!

up
Shop is in view mode
View full version of the site
Sklep internetowy Shoplo.pl